The Dragon Under the Hill
by Alex Fonteyn 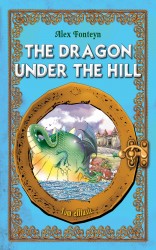 Adapted from the classic Polish tale, ‘The Dragon under the Hill’ tells the story of an ancient principality and its inhabitants’ struggle with an uninvited and extremely unwelcome guest! An evil fire breathing dragon decides to settle in the principality of Prince Krakus, pillaging and plundering the country! Even the prince’s knights encounter much more than they bargained for when they try to defeat the dragon. But that is not all! Worse is to come when the dragon decides that the prince’s daughter, Princess Anna, would make a very tasty meal. But help is at hand! A simple shoemaker named Jacob has a plan. He believes that the key to defeating the dragon lies not in force, but in being clever and brave. Prince Krakus is at his wit’s end and permits Jacob to implement a simple, yet daring and clever scheme. This classic story is at once exciting and educational, demonstrating that there is more than just one way to defeat an enemy. Intelligence and brains can be just as effective as fighting and brawn.
5+
Genre: children's literature, ebooks, Nanook fairies
Illustrated by Arthur Friday
Previous ReviewThe Ugly Duckling by Hans Christian Andersen

No regrets, no second thoughts. We, kid and I, had fun. Looks like we’ll be reading it again. With a bit of animal-voice acting, the stories come to life v. nicely all the way to the moral punch line (unfortunately a rarity in today’s world)!

Great buy for a great sleep! Since I’m usually the designated bedtime reader who puts the kids to sleep, I’d better enjoy the book too. So here’s my take… If my yawning kids urge me to read on, eager as much as I am, something must be right.

“This was a book that has served my 8th grade student that needed a book that not only supplied what he hadn't had the year before but gave additional work on a higher level.”
Patricka A. Dake

“A lovely introduction to an old classic. Beautifully reinterpreted and well illustrated. Will keep most children absorbed and wanting more.”
Philidor

“Bought it for a friend's kids. I read it to them and they loved it. Now they want a paper version too. Highly recommended.”
Chris in Fukuoka

“This book provided some really good exercises. We used in to add enrichment and additional practice for students during our summer program. Students liked the tasks.”
D. Johnson